The conductivity of materials is a spectrum; on one end lies conductors, materials that readily allow the flow of electrical current, and at the other lie insulators, which block current flow. Between these extremes lie semiconductors that only conduct under certain conditions, making them perfect for controlling electric current.

Pure Silicon (Si) and Germanium (Ge) are intrinsic semiconductors. They are poor electrical conductors because the 4 outer (valence) electrons within each atom are covalently bonded to 4 adjacent atoms, leaving few delocalised electrons available to conduct. Despite their diamond-like lattice, the conductivity of these materials increases with temperature because far less heat energy is required to free valence electrons from their bonds than is required to release electrons from their bonds in insulating materials. 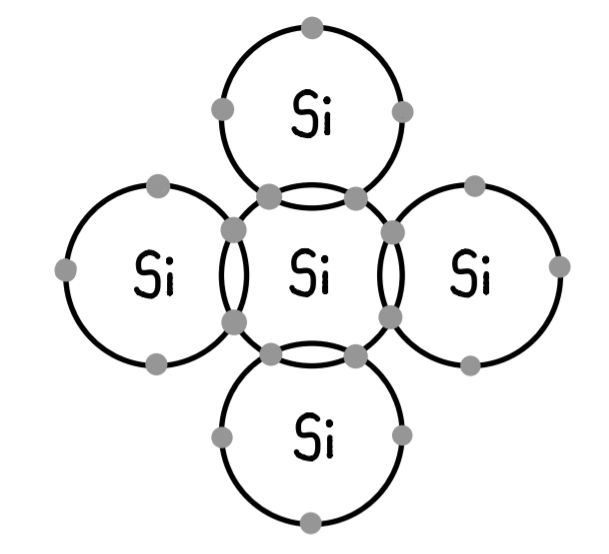 Adding a small amount of phosphorus (P) dopant to Si will produce an n-type semiconductor. P atoms have 5 valence electrons, 4 of which bond with the Si atoms as previously described, and 1 of which becomes a part of a sea of delocalised electrons; as such, it is known as an electron donor.

These impure semiconductors are of little use to use separately, but when brought together to form a p-n junction, they behave in a manner which makes them extremely useful. The p-n junction is now a fundamental building block used to create diodes and solar panels.

Due to the net negative and positive charge that develops in either side, an electric field develops across the junction, pushing the free positive charges in the p-type semiconductor, and free negative charges in the n-type material, away from the centre and toward the outer edges of the material. This creates a central region which is depleted of all charge carriers, known as the depletion region. This behaves like an insulator that separates the far ends of the p and n type regions, effectively acting as a potential barrier.

This barrier is approximately 0.6-0.7V in Si; once this voltage is surpassed, majority carriers can overcome the barrier and the material can conduct once again. The diode, one of the simplest semiconductor devices, only allows current to travel through it in one direction, by exploiting this property. The direction in which the diode allows the flow of current – provided that there is a sufficient voltage supply to overcome the potential barrier – is known as the forward bias. In reverse bias, majority carriers are pulled further away from the p-n junction and thus the depletion region increases in width and current flow is blocked.